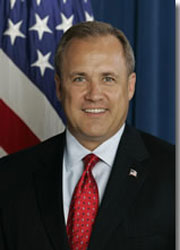 Former Iowa Congressman Jim Nussle has spent nearly 11 months working out of a D.C. office once used by the son of a famous former president.

Nussle began work as President Bush’s budget director last August. Nussle was assigned the office Robert Lincoln, son of Abraham Lincoln, used when he was Secretary of War under Presidents Garfield and Arthur.

Nussle’s formal title is director of the Office of Management and the Budget. "You spend most of your time around here being the bad cop…trying to stop bad things from happening, preventing people from wasting money or spending money," Nussle says.

Nussle is the first Iowan to reach the White House inner circle since Henry Wallace, the former US Ag Secretary and vice president during the Franklin Roosevelt administration. Nussle has found the job of O.M.B. chief to be more than he imagined. "Having had the experience that I had — being chairman of the budget committee and watching and actually knowing a numbers of former budget directors for presidents — I thought I understood a little bit about the job, but I can tell you that having been in the role now for almost a year, it’s a far more expansive role and it’s a far more challenging role than even I thought at that time which I love and it’s obviously exciting as a result," Nussle says, "but it is slightly different than I expected."

Nussle is cautious about revealing what advice he’s given the president.  Nussle is a member of the president’s cabinet. "Second, I run a department of 500 people, so you have to be a manager," Nussle says. "…Then the third job is I’m a direct member of the very senior staff that have direct access to the president on a regular basis, sometimes daily and often even then in a daily situation, hourly, and then there are, of course, when he’s traveling or days when fiscal issues may not be coming up directly so you won’t see him."

Bush is to exit the White House on January 20, 2009 and it appears Nussle may be among the senior staff who stay for the duration. "Based on what the president has decided is his agenda — he has I think he has popularly said he intends to sprint to the finish and he is doing that — it seems to me that we will be very intense all the way through ’til January," Nussle says.

Nussle made his comments during a telephone interview with Radio Iowa. Listen to the entire interview by clicking on the audio link below.