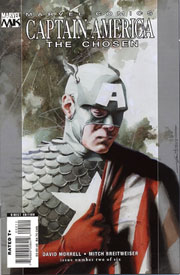 Everyone needs new challenges, even a globally successful novelist. David Morrell, a former University of Iowa English professor, has 18-million books in print in 26 languages, but has just put the finishing touches on an entirely new writing endeavor.

In an interview with Radio Iowa, Morrell says he was asked by an editor at Marvel Comics to tackle a new spin on a legendary patriotic hero. Morrell says the editor wanted him to write a self-contained six-part series about Captain America.

"I’d never written for comic books before and I believe that writers should try all kinds of different ways. I just thought, ‘Hey, when I was a kid, I liked comic books. Maybe I can do something with this.’" The sixth and final book recently hit newsstands and he says the series has been well-received by comic fans and critics.

A hard-bound edition of the whole series will come out later this year. The 65-year-old Morrell says he was excited by the prospects of writing in the new medium and had specific ideas about where the storyline needed to go.

He says: "To me the theme was, the burden of being a superhero in today’s troubled world, especially if you’re a superhero named after the United States. I thought, that’s a big subject and I wanted to do it realistically and I wanted to make people believe that Captain America was a real person and I wanted to have a lot of emotion as well as action in it."

Morrell lived in Iowa City from 1970 through 1992, teaching at the U-of-I for 18 of those years, and now resides in New Mexico. Among his 29 novels, "First Blood" may be best known as it was the basis for the Rambo movies. His 30th book, a spy/action novel called "The Spy Who Came For Christmas," is due out this fall. For more information, visit Morrell’s website .