You are here: Home / Business / Bar owners get their day in court over smoking ban 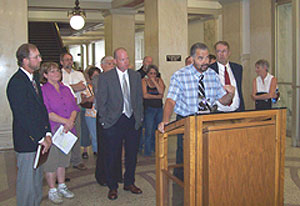 Two groups of Iowa bar and restaurant owners had their first day in court today as a judge listened to legal arguments about the state’s 32-day-old ban on smoking in most public places.

The judge says he’ll rule as soon as possible on the first request from bar owners — that enforcement of the smoking ban be suspended until the entire case is settled.

The lawyer for bar owners called the law "bizarre" and "strange" and he raised several objections based on constitutional grounds. A lawyer for the state said the legislature had the authority to look out for the public’s health by banning smoking. Three bar owners took the stand to air their complaints about the law, mostly about its economic impact.

Iowa Bar Owners Coalition president Brian Froehlich, owner of Froh’s Pub and Grub in Wilton, was first to testify. "Did I get a little heated? Yea, I did, but you know what? I’ve been on this fight since January and it’s personal," Froehlich told reporters afterward.

Amanda Albrecht owns Hoss’s Saloon in Fairbank and she testified that her profits dropped at least 80 percent since the smoking ban went into effect. Albrecht put the bar up for sale last Sunday and she’ll probably close for good on Monday. "I’ve owned it for almost 10 years," she said in an interview. "Over the years I’ve been able to watch children that I knew, you know, that become drinking age and, you know, they have their 21st birthday there, you know, and stuff like that and I’m not going to be able to see that (any) more."

Jonathan Van Roekel, president of Clinton’s Organized Bar and Restaurant Owners, operates two bars in Clinton. He was the primary speaker at the bar owners’ news conference after the hearing concluded. "Today is one day in the fight to give back freedom to Iowans. We are looking forward to the judge’s ruling and we hope it is prompt. Iowa citizens should be free to choose where they want to eat, where they want to drink and where they want to spend money," he said. "No one should be forced to eat, drink or do business in a building that is nonsmoking."

Joe Sturgis, owner of the "Rusty Nail" in Davenport, told reporters many Iowa bar owners are committing acts of "civil disobedience" and allowing smoking in their establishments. "I’d say 80 percent of them are still allowing people to smoke in their bars because if they don’t, they won’t have anybody in there," Sturgis said.

Bill Duncan, owner of the "Two of a Kind" bar in Fort Madison, called the smoking ban a disgrace. "We’re not here crying to you because we want to whine," Duncan told reporters. "We’re here fighting for our livelihood, our financial survival."

The lawyers representing the state who argued in favor of the ban declined to be interviewed. Assistant Attorney General Jeff Thompson told the judge the "vast majority" of the 82,000 Iowa businesses affected by the smoking ban are complying with the law, and he argued it would be disruptive to suspend the law a little more than month after it went into effect.