You are here: Home / Human Interest / Astronaut Whitson gives talks with hopes of inspiring others 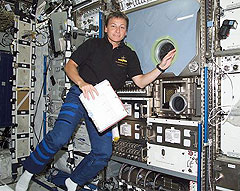 Each Iowa homecoming gets a little more surreal for Iowa-born astronaut Peggy Whitson.

The first Iowa woman in space, who spent more than a year in orbit, spent last night as Grand Marshal of the Iowa State Fair parade.

The Beaconsfield native likely won’t have time in her schedule to pop by the Iowa Historical Museum in Des Moines, where Whitson is now the subject of a glass-encased exhibit that includes the blue flight suit she wore as the International Space Station’s first woman commander.

Whitson says, “I contributed some items to the historical museum and I just figured I wasn’t ever going to wear it again so somebody ought to get some benefit from it. I didn’t know they’d put it up or anything. Hopefully, someone will see that and think, ‘Wow, if a farmer’s daughter can become an astronaut, I can do whatever I want, too.'”

The 48-year-old will be giving talks at the Science Center of Iowa today about her experiences in space. She spent 377 days aboard the space station, the longest time any American has been aloft, in addition to nearly 40 hours doing spacewalks, more than any woman. In an interview with Radio Iowa, Whitson was asked if it’s not a little odd how much attention she gets during her visits home.

“I find it somewhat unbelievable, not just odd,” Whitson laughs. “I was inspired by people walking on the moon and being astronauts when I was young and if I can inspire anyone to live their dream, then I would like to do that.”

Whitson is an accomplished scientist, with a doctorate in biochemistry, and during her 2002 mission aboard the space station, she was named as its first science officer. While she’s served longer than anyone else aboard the space station, orbiting more than 200 miles up, Whitson would love to be assigned to yet another mission, perhaps for America’s return to the moon.

“Absolutely, I just hope I can stay in good enough physical condition to make it,” Whitson says. “We have a lot of physical requirements to be able to fly in space for short and long-duration periods of time.”

The space shuttle fleet will be phased out over the next few years as the NASA mission shifts to a new spacecraft and renewed moon landings, with eventual journeys to Mars. For information on Whitson’s appearances today, visit the Science Center of Iowa’s  website.