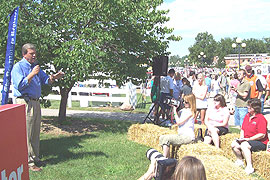 "Companies have 10 year leases. If they do not use that under current in five years, they lose it," Latham says. "…The idea that somehow these companies are not going to use the resources that they’re paying for just defies any common sense or any kind of business logic that I’ve ever heard of — the fact that people would pay money for leases and not use them, if in fact there was anything there, is just nonsensical."

Latham supports expanding the amount of American land — and coastal shoreline — which can be explored for oil and natural gas. "The Energy Department will tell you that around 97 percent of the energy resources we have in this country are not eligible to be explored at this point…We’ve got to look for American sources of oil, American sources of natural gas," Latham says. "We can create millions of American, good-paying jobs right here and do that."

Latham also supports expanded drilling in the Arctic National Wildlife Refuge or ANWR "It’s a very tiny footprint," Latham says, "like one letter on the front page of The New York Times is the amount of footprint it would have on ANWR."

Latham made his comments to reporters after speaking late this morning at The Des Moines Register’s Soap Box. He told a small group of fair-goers that the U.S. needs to build more nuclear power plants.

Latham called nuclear power a "very environmentally-friendly source of energy." A campaign spokesperson for Latham’s opponent was not immediately available for comment.