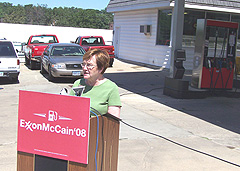 "Americans are hurting, and we need strong leadership to meet our energy challenges, and that person is not John McCain,"Judge says, "I’m here today because I think it’s time for some straight talk about Senator McCain’s energy policies."

Judge says some Iowa Republicans also don’t agree with McCain’s energy plan. "Yesterday, the A.P. reported that my successor as Secretary of Agriculture, Bill Northey, in fact does not agree with McCains stance on renewable energy," Judge says, "And even Senator (Chuck) Grassley does not see eye-to-eye with Senator McCain." Judge says McCain introduced an amendment to eliminate the wind energy tax credit that was championed by Senator Grassley.

Judge says: "I believe that’s right, but think that Barack Obama has got a comprehensive plan now, that addresses energy needs, that is supportive of the industry, and I think McCain will continue, and does continue to believe that renewable energy should not be subsidized, and I think that is the wrong approach." McCain is set to visit the Iowa State Fair Friday morning.