You are here: Home / Agriculture / Butter cow still whips up lots of attention 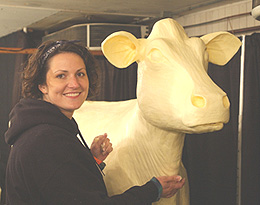 If you ask people at the Iowa State Fair about the one thing they “must see” before leaving, the most common answer is the butter cow.

It’s been an Iowa State Fair tradition for 97 years. That fact alone may explain why there’s usually a line of people in the Agriculture Building, waiting to get a peak at a life size sculpture of a cow, made from 600 pounds of Iowa butter.

Sarah Pratt, a teacher from West Des Moines, is now in her third year as the “Butter Cow Lady.” Pratt said, “I think it’s been a tradition so long…so what happens is you have folks that have grown up in Iowa and came (to the fair) when they were kids, now bringing their kids back…and so it’s passing on that tradition.”

The 31-year-old Pratt grew up in Tama County, where she learned the craft of sculpting with butter from Norma “Duffy” Lyon. “When I was about 14, I volunteered or asked to go (to the fair) and help her out. So at that time, I was just handing her butter really, and over the years she trained me,” Pratt said.

This year, Pratt has also created a buttery likeness of Olympic gymnast Shawn Johnson and an agriculture display that features Norman Borlaug. The entire display will involve more than 1,000 pounds of butter. Much of the butter is recycled and reused for up to 10 years.