You are here: Home / Outdoors / Schmett hands out "Boswell/Obama meters" at Fair 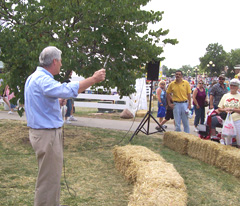 Republican congressional candidate Kim Schmett adopted the role of carnival barker during his 20-minute stint at The Des Moines Register’s Soap Box on the Iowa State Fair.  Schmett stepped up to the microphone and immediately began his pitch.

Schmett, the Republican candidate in Iowa’s third congressional district, is hoping to unseat incumbent Democrat Leonard Boswell. Schmett’s linking Boswell now with the advice Democratic presidential candidate Barack Obama recently offered, that checking your tires to ensure they’re properly inflated improves gas mileage. "If you don’t have a Boswell/Obama meter, this is your chance to get it. We’re going to give up to 50 free Boswell/Obama meters away, just in a couple of minutes. Come on over. Have a seat. These are really important to have," Schmett said. "If you haven’t got one of these, you won’t want to miss out."

You guessed it.  That free "Boswell/Obama meter" was a tire gauge and Schmett, like many a maligned salesman, doesn’t really believe the pitch he was making.  "It’s a miracle gadget. You really do have to have one of these things," Schmett said. "…These things are miracle working devices. They will save a fortune for your family. They will solve your fuel problems. They will help the American economy. If you don’t have one of these for your family, you are going to be missing out."

Schmett, like other Republicans, used the tire gauge as a way to ridicule Democrats like Obama and Boswell on the issue of energy. But Schmett went one step further, jokingly suggesting a federal "Department of Pressure Evaluation" could be established at the intersection of Interstates 35 and 80 in Des Moines — so a federal employee could check your tire pressure. Schmett even had a clipboard, urging fairgoers to sign up to work in that agency.

"If any of you think that this little devise is going to save all of our energy problems for the future, I’ve got some early applications for you. It says: ‘I want to sign up to be a DOPE employee,’" Schmett said. "If you believe Senator Obama’s going to solve your energy problems, let’s sign up folks."

Schmett later told reporters he’s never held a sales job, but talked the talk of a ginsu knife salesman to make his political point. "It’s the Iowa State Fair and we were behaving in the best Iowa State Fair tradition so I think you’ve got some tough competition out there with a lot of great things and some fun things," Schmett said. "We wanted to have some fun, but we wanted to have some real serious conversation on some real serious issues, too."

A spokesman for Congressman Boswell’s campaign issued a written statement late Monday afternoon.  "For more than two decades, Congressman Boswell has been working to bring real solutions to our energy crisis through investment in alternative fuels," said Mark Daley, a Boswell campaign spokesman. "Perhaps Mr. Schmett’s time would be better served trying to figure out how to put some air into the tires of his failing campaign."