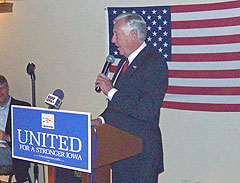 A top Democrat in the U.S. House today assured Iowans there’ll be a disaster aid package for Iowa flood and tornado victims soon.

House Majority Leader Stenny Hoyer of Maryland says it’ll be “one of the first items” on the agenda when Congress reconvenes in September.

Hoyer spoke this morning to the Iowa Democrats who’re in Denver for their party’s presidential nominating convention. “I want to tell you (Iowa Democratic Congressmen) Dave Loebsack and Bruce Braley and Leonard Boswell were very concerned about adjourning. We didn’t have all the things we needed to get together to do what we needed to do,” Hoyer said. “We didn’t have an assessment of exactly how much we needed to do, but as I told Chet — your governor — as I was walking through the door, if we can rebuild Baghdad, we sure can make sure that we rebuild Iowa.”

The Iowa Democrats got to their feet and applauded. “It always brings a rising ovation when you say, ‘I’m here to give you money,’ Hoyer joked, to laughter from the crowd.

Speaker Nancy Pelosi, the top Democrat in the House, will visit Iowa on September 8th to view flood and storm damage first hand.  Congressman Dave Loebsack, a Democrat from Mount Vernon, said farmers in his district are suffering right along with the city-dwellers.

“We hear a lot about FEMA and HUD and community development block grants, but we also have to be thinking about USDA and the rural areas as well,” Loebsack said at the Iowa Democratic Party gathering in Denver. “We have a lot of crop damage, folks, and we can’t forget what’s happened in those areas.”

As he did yesterday, Congressman Bruce Braley, a Democrat from Waterloo, said there’s currently money into the pipeline for storm victims in Iowa, but the Bush Administration, according to Braley, is guilty of footdragging in getting it into the hands of Iowans.