A piece of political memorabilia saved from flood waters in Cedar Rapids has made its way to the Republican National Convention in the Twin Cities. 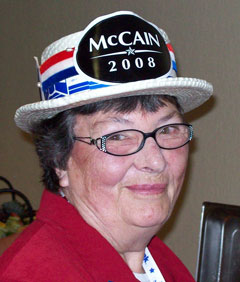 Rose Eaton of Cedar Rapids is wearing a white straw hat that has name tags on the inside. Those tags show Mildred Ward of Marshalltown wore the hat at the 1980 Republican National Convention. Ward’s daughter, Rosemary Harvey, lives in Cedar Rapids, in a neighborhood that was flooded in June.  "And so she was cleaning out her house after the flood, but this was in the attic," Eaton says. "This was safe."

Harvey, the flood victim, and Eaton, an alternate delegate to the Republican National Convention, attend the same church in Cedar Rapids. "She just found out I was going to the convention," Eaton says. "And she just says, ‘Rose, I’ve found this hat and I’m going to give it to you to wear to the convention.’"

Eaton, who will celebrate her 79th birthday next month, has been wearing it in the convention center, and to breakfast with her fellow Iowans. The hat has its original Reagan sticker on the back, and Eaton has put a McCain sticker on the front. Eaton sees similarities in Reagan and McCain. "Reagan was kind of a maverick, wasn’t he?" Eaton says. "…Reagan was somebody that stuck to his principles and McCain is someone that sticks to his principles. Even though he sometimes goes off in the other direction, you know where (McCain) stands."

Eaton retired after a 33-year career at the "Square D" plant in Cedar Rapids and she became a well-known political volunteer in the Cedar Rapids area in her retirement.