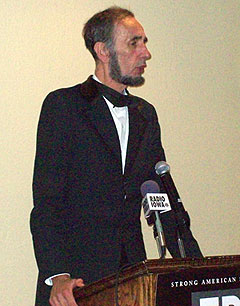 Iowa delegates at the Republican National Convention heard the words of an Illinois senator this morning.

No, Barack Obama, the senator from Illinois who is the Democratic Party’s 2008 presidential candidate, wasn’t there. But Lance Mack of Marion, Iowa, spoke the words of former Ilinois Senator Abraham Lincoln.

Mack is a tall, thin man who looks a bit like the 16th American president and he quickly took off his black, “stove pipe” hat and gestured to the microphones in front of him.

“We didn’t need these things when I was campaigning,” Mack said, impersonating Lincoln. “All I needed was a strong voice.”

Mack has been appearing at the “Civic Fest” this week at the Minneapolis Convention Center. As you may recall, Abraham Lincoln was the Republican Party’s second-ever presidential nominee in 1860 and Lincoln won re-election in 1864.

Mack recounted a portion of a speech Lincoln delivered when he was 28 years old, just after he’d moved to Springfield, Illinois. “My friends, we live in a nation which was founded with a government not of men, but of laws,” Mack recited. “Let therefore reverence for the laws be breathed by every American mother and father to the lisping babe that prattles upon their laps.”

The Ohio delegation — yes, Ohio, not Iowa — invited the Lincoln impersonator to sit with them on the convention floor last night. Mack was dressed as Lincoln.

After Mack spoke this morning, an Iowan offered him some advice: “avoid the theaters.”