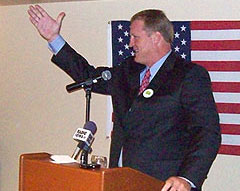 Iowa Governor Chet Culver says he’s giving federal officials 10 days to give the state an answer on disaster relief money — or the state will move ahead on its own.

"The bottom line is, is that the federal bureaucracy in Washington continues to disappoint us, it’s one thing after another..there’s one hurdle after another in terms of getting us the obligated money that we need. And I’m here today to say enough is enough," Culver said.

Culver says they’ve been working for months with H-U-D to get housing money flowing and he’s calling on Washington, the administration, FEMA and H-U-D to streamline the process. "And if they’re not gonna do their job, then we’re going to have a special session and move forward without ’em," Culver says. Culver says 85-million dollars has been approved by Congress for housing, but H-U-D so far they hasn’t sent the money to the state. Culver says the state has a plan in place to move the state ahead in flood recovery and needs an answer from federal officials.

Culver says it’s not a threat, its an "either or proposition" as he says the state can’t wait and the federal officials need to act because there’s a "pending crisis" in communities like Palo, Cedar Rapids and New Hartford. Culver says the state has identified some $73-million that can be used to get things started if the federal government doesn’t come through.

Culver says some five million dollars would come from community development block grant money, as much as 10 million dollars from the values fund, some five million from the power fund, and the state could delay the new state office building and new state prison. Culver says he wants to hear an answer from federal officials by September 15th or he will look to calling a special legislative session to begin spending state money to get the recovery moving ahead.