You are here: Home / Politics / Govt / Iowa Senators part of effort to save Delta Queen riverboat 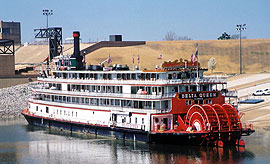 Iowa’s two senators are part of an effort to save an historic riverboat. The Delta Queen is a steam-powered riverboat which has roamed up and down the Mississippi River from St. Paul to New Orleans, but it’s paddlewheel is scheduled to stop churning the Big Muddy at the end of the season.

Starting in 1924, pieces of the boat were built in Scotland and it’s considered one of the most expensive and extravagant steamboats ever built. After ferrying passengers in California, in 1946 the Delta Queen was brought through the Panama Canal to carry passengers on rivers like the Ohio and the Mississippi. The Delta Queen is the last remaining so-called "traditional" steamboat that carries overnight passengers on America’s inland waterways.

But since 1966, the Delta Queen has been subject to technical provisions of the Safety at Sea Act. Iowa’s U.S. Senators — Tom Harkin and Chuck Grassley — say that law was intended for ocean-going ships, not riverboats. They’ve joined with a crew of other senators to try to renew the exemption that would allow the Delta Queen to continue cruising past October 31st. docked.

"Our legislation, and this previous legislation, has from time to time exempted the Delta Queen from those regulations," Grassley says. The 80-year-old boat has been protected from Coast Guard safety rules by acts of Congress since the 1960s. The Delta Queen carries up to 200 passengers on overnight cruises from New Orleans to St. Paul and from Cincinnati to Pittsburgh.

Grassley says he couldn’t sit by and watch the riverboat, which is a U.S. National Historic Landmark, be relegated to mothballs. "We’ve heard from a lot of constituents in Iowa about how they’re enjoying the Delta Queen," Grassley says. "Obviously, they must be some of those that stay overnight on it and they want to keep it going as there is a lot of interest up and down the Mississippi River and the Ohio River in the same way."

Senator Tom Harkin says the Delta Queen is safe, and is never more than a mile from land. "To view the Delta Queen tugging along the Mississippi River is to be taken back to the days of Mark Twain. This vessel is a true piece of Americana and it must be preserved," Harkin said in a prepared statement issued September 16. "It would be a travesty if this historic steamboat was retired this season simply because it was caught up in legislation never intended for riverboats."

Ten other senators are co-sponsoring the bill that would keep the Delta Queen cruising.