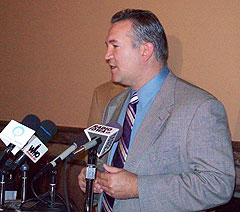 Two top leaders say if Democrats win a majority of seats in the Iowa House this November, their agenda in January will focus on expanding the state’s renewable energy industry and cracking down on employers who exploit child and immigrant laborers.

"We’d like to have at least felony-level penalties for corporate CEOs who skirt immigration laws," McCarthy says, "and that would allow people like Attorney General Miller much more leverage, much more tools — if you will — in his tool box for cracking down on immigration laws."

House Speaker Pat Murphy, a Democrat from Dubuque, says Democrats want to explore giving cities and counties new, alternative ways to tax so the commercial property taxes that businesses pay don’t keep going up so significantly. One alternative is a so-called "impact" fee. "They do this in several other states that surround us where when they’re building a new building they restrict how much their property taxes can go up by charging them a onetime impact fee," Murphy says. "Now, sometimes in cases like with the developer that we had that testified before the interim committee last year…she was guaranteed less than a five percent increase every year on her property taxes." According to Murphy, that promise of five percent increases in commercial property taxes is more palatable as many businesses are seeing their property taxes go up 20 percent each year.

In another business-related move, Murphy says Democrats would like to expand the $100 million Iowa Power Fund which seeks to boost businesses in the biofuels and alternative energy industry. "We’ve created about a net of 2000 green collar jobs in the last two years," Murphy says. "If we have new job opportunities, we want to respond to those immediately."

In the wake of this spring’s flooding and storm damage, the governor has asked state agencies to hold the line on spending. Murphy says it may be necessary to dip into the state’s emergency reserves and take other actions to help Iowans recover from this year’s damaging weather. "I think you’ll see a long commitment and quite frankly the commitment’s not going to be just this next session," Murphy says. "I think you’re going to have to see a commitment for four or five years to help rebuild these communities and get them back up."

Democrats have held majority control of the Iowa House for the past two years and Governor Culver, a fellow Democrat, vetoed a bill that originated in the House which would have expanded the bargaining rights of union workers in the government sector. "The bottom line is the governor vetoed it so we haven’t had discussions about that. We would need to sit down and see what the governor would want to do," Murphy says. "That’s in his court at this point since he vetoed it. We would have to hear what he has to say about that before we would ever try to address it and he hasn’t spoken to us about it since."

Voters this fall will choose representatives in each of Iowa’s 100 House districts, then those 100 lawmakers will gather in Des Moines in early January for the legislature’s regular session.