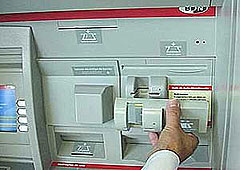 A form of identity theft that’s been reported around the country is now making its way into Iowa.

Police in Cedar Rapids are investigating three separate thefts by ATM "skimming" that have occurred since September 1st. Skimming involves an electronic device that can read the magnetic strip of credit or debit cards.

Cedar Rapids Police spokesperson Sergeant Cristy Hamblin says she’s aware of two such devices for automatic teller machines. "One goes inside of the ATM slot," Hamblin said. "It’s literally as thin as your ATM card and slides inside the machine. The one that was used here in Cedar Rapids was attached to the outside of the ATM."

The three victims of ATM skimming in Cedar Rapids told investigators they did not notice anything extremely unusual about the machine or their transaction. Hamblin says each victim did report having some difficulty pushing their card through the slot, but did not feel it was anything significant. In each case, the device captured the ATM card information. The victims then noticed unauthorized purchases made with their cards out of state.

Hamblin says it’s a good idea to record and keep close track of your bank transactions. When using an ATM, Hamblin suggests making a pre-transaction inspection of the machine. "Look and see if there’s anything attached to it, does it look suspicious or are there keys that are broken? If there are, drive to another machine and report it to that bank immediately," Hamblin said.

In many ATM skimming cases, investigators say the thief mounted a hidden camera to capture the keystokes used to enter a card’s password. Hamblin suggests covering the keypad with your free hand anytime you enter the PIN.