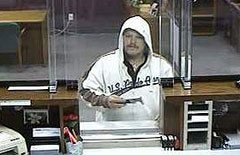 Officers arrested 42-year-old Rick Lee Ivie of Creston on Monday. He was booked in the Polk County Jail on three counts of third-degree burglary.

Ivie is accused of breaking into two Des Moines banks and a credit union during the early morning hours of September 24th.

Police have not said what was taken in the burglaries. Police were aided in their investigation by video footage captured inside one of the banks – which clearly shows the suspect’s face.