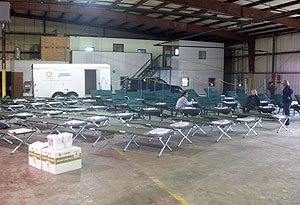 When the next disaster strikes, 14 eastern and northeastern Iowa counties are a little better prepared to respond.

As of this week, all 14 counties now have mobile trailers that are stocked with everything needed to set up an emergency shelter — just add a high school gym.

Dan Darland, a regional disaster preparedness planner from DeWitt, says each 16-foot trailer is packed with supplies. Darland says: “They have cots, both standard Army-type cots and a medical special needs cot, blankets and linen sets. There’s also infant care kits, diapers, wipes and changing pads and such. The other major piece of the trailer is a power generation set.”

That includes a 15-kilowatt generator and plenty of power cords to run the entire operation — lights, medical equipment, computers, a refrigerator and whatever else is needed. Each trailer has supplies for 50 people.

Darland says if there’s a major incident, all 14 trailers could be rallied together from the region to take care of as many as 700 evacuees.”They are regional assets, pre-positioned, one each in the 14 counties so each county has first dibs on their trailer but if another county is having an issue where they have displaced people that they need to shelter, and one of the other counties doesn’t, then that trailer is moved down to the county that has the need,” Darland says. 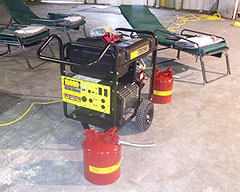 He’s coordinated the project in all 14 counties with the various emergency management offices and county health departments.

Each equipped trailer cost about $13,000 and he says they were purchased for the counties through federal dollars, both from the C.D.C. and Homeland Security. The key is their mobility.

Darland, a Lieutenant Colonel in the Iowa National Guard, says: “The trailer is to store the supplies because everyone has storage issues, so you can just leave the supplies in the trailers but then when they need to be deployed, you just have to hook up and go, whether it’s within one of the communities in that county or taking it to one of the other counties within the region. You just hook up the trailer and get on the road.”