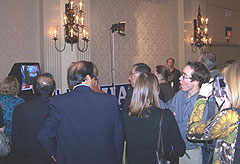 Senator Tom Harkin, a Democrat from Iowa, is the projected winner of his re-election race against Republican challenger Christopher Reed.

"It’s been the greatest honor and privilege of my life to represent you in the United States Senate," Harkin told supporters at about 10 o’clock Tuesday night. "It’s truly humbling to be elected for a fifth term. Thank you, Iowa."

During a telephone interview with Radio Iowa this summer, Obama talked about his Caucus win. "The Iowa Caucus was lift-off for us and I think it was indicative of how powerful the Iowa Caucus can be that what we were able to successfully do in Iowa ultimately translated into the nomination after having campaigned in 48 other states," Obama said.

John McCain was able to survive a rough patch in his campaign partly because Iowa Republicans did not choose the well-financed Mitt Romney or the well-known Rudy Giuliani, but selected Mike Huckabee as the winner of the Iowa Caucuses. McCain, who wound up finishing fourth in the Caucuses, was reflective in late December during a campaign stop in Des Moines. "It’s an honor that people would take their time out on a very cold morning to come and spend this time with me. It’s a great honor and I will never forget it," McCain said during a town hall meeting in an Elks Club. "And I will always tell you that, win lose, we will be able to look on this campaign and say, ‘We ran an honorable campaign," and that’s what I want my legacy to be."

Dave Roederer , John McCain’s Iowa campaign chairman, told reporters it was an uphill climb for Republicans all year. "There is kind of an anger that was out there and it was frankly more than we could overcome," Roederer said at about 10 o’clock Election Night.

Obama’s final rally in Iowa was last Friday, outdoors in downtown Des Moines. "On the day of the Iowa Caucus, my faith in the American people was vindicated and what you started here in Iowa has swept the nation. We’re seeing the same turnout. We’re seeing the same people going and getting in line — volunteers, people participating," Obama said. "A whole new way of doing democracy started right here in Iowa and it’s all across the country now."

McCain campaigned heavily in Iowa — making trips to the Iowa State Fair in both 2007 and again in 2008. "It’s great to be back in the heartland of America," McCain said to open most of his Iowa speeches. McCain and his running mate, Sarah Palin, campaigned in Iowa more than Obama did in the closing weeks of the campaign. Palin made a final pitch for Iowans’ votes on Monday afternoon in Dubuque. "Iowa, we are asking for your vote," Palin said.

Governor Chet Culver, a Democrat who endorsed Obama after the Caucuses, flew to Chicago Tuesday evening to be at Obama’s election night party there.