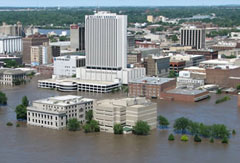 The Rebuild Iowa Advisory Commission will meet today and tomorrow to discuss flood and tornado recovery issues that state lawmakers will need to address when they convene in January.

She says the report will provide a "long term picture" for how the state can respond to this summer’s storms and suggest measures that could be implemented to protect the state from future natural disasters. The Commission will present the report to Governor Culver on November 17th. He was handed a 45-day report back in early September.

"This 120 day report will really identify some long term recovery planning strategies in areas (such as) housing, economic development and transportation," Potthoff said. On Wednesday, Governor Culver announced that 6.6 million dollars in federal funds is on the way to help the state cover the costs of the storm response efforts of the Iowa National Guard.

To date, the state and FEMA have obligated more than 409-million in federal funds for public assistance for projects in Iowa. "This 6.6 million is just part of that and we expect more to come," Potthoff said.

More than 4,000 Guard members were called to duty in the aftermath of the tornadoes and floods. The Federal funds will cover 90-percent of the 7.4 million dollars spent by the Iowa Department of Public Defense. The Rebuild Iowa Advisory Commission’s meeting starts at 1 p.m. today at the Sheraton Hotel in West Des Moines.