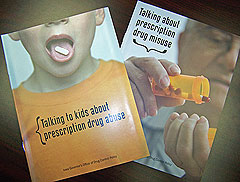 New statistics confirm that prescription drug abuse is a growing problem in Iowa.

Kathy Stone, with the Iowa Department of Public Health, says nonmedical use of pain relievers is the fast growing form of substance abuse in the state.

"It’s a problem about which many people are not aware," Stone said. "More people are concerned about their kids drinking or using meth, and those are legitimate concerns, but the increase in (abuse) of those over-the-counter and prescription medications is much more of a concern."

Kevin Frampton, director of the Iowa Division of Narcotics Enforcement, says agents have worked 79% more prescription drug cases so far this year compared to all of 2007. In addition, agents have seized 348% more diverted pharmaceuticals.

Frampton says many of those cases involve criminals that are "doctor shopping." He says people will go to a doctor, complain of a pain, get a prescription filled and then turn around and sell those pain pills. Federal officials say the most popular abused drug is Hydrocodon. That also appears to be the case in Iowa.

"The majority of all of our investigations and seizures have (involved) Hydrocodon or a derivative of that," Frampton said. Stone says nonmedical use of pain relievers is an especially big problem among teens. She says medicines are generally viewed by teenagers as "safe" and they’re easy to obtain.

"Over the counter drugs and prescription drugs are available in the family medicine chest. You just have to go to the bathroom, open the door and there it is," Stone said. "That’s different than having to meet someone…you’re not going downtown to meet somebody on a dark corner."

The Governor’s Office of Drug Control Policy is launching an educational initiative directed primarily at parents. The effort will include public service messages, brochures, posters and presentations. Officials are also hoping a new Prescription Drug Monitoring Program, expected to go on line next spring, will curb the illegal diversion of prescription drugs.

The electronic system will involve a centralized database to monitor pharmacy transactions. State officials say while prescription drug abuse is growing, alcohol remains the most widely abused substance in Iowa, followed by marijuana and methamphetamine.