You are here: Home / News / Iowa football hopes for New Year depend on finale in Metrodome 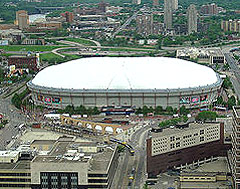 A season that at one time appeared to be headed nowhere can end with eight wins and an appearance on New Year’s Day if the Iowa Hawkeyes can post a victory at Minnesota this weekend.

The Hawks at one time stood 3-3 but have won four of their last five games after a 22-17 victory over Purdue.

Iowa coach Kirk Ferentz says there have been disappointments and moments of really feeling pretty good about things. "This team has really been a enjoyable to work with, that’s the thing that strikes me, the attitude the work ethic," Ferentz says.

The Gophers have made major strides under second year coach Tim Brewster and are also 7-4 after a 35-32 loss at Wisconsin. He says the Gophers had every chance to win the game as they have in all their games and Ferentz says it will be a real tough ballgame.

This will be Iowa’s final game in the Metrodome as the Gophers mobve into their new on campus stadium next season. Ferentz was an assistant during the Hawks’ first game there in 1982 and has been part of many memorable moments in there, both good and bad.

Iowa already reclaimed the Cy-Hawk and Heartland trophies with wins over Iowa State and Wisconsin. They will try to hang on to Floyd of Rosedale with a win this week. Ferentz says the trophies show that you’ve won and that’s what’s important, and he says they realize if they don’t do their job, then they will lose one of the trophies.

Junior running back Shonn Greene is approaching the 1,600 yard mark heading into the finakl game of the season. Ferentz says as well as Greene has performed on the field he has been just as impressed with the way he has handled success. Ferentz says there have been a lot of great stories in the program, including 2000 with Brad Banks who burst onto the scene in his first year as a starter. He says Banks handled it beautifully and Greene has done the same thing.