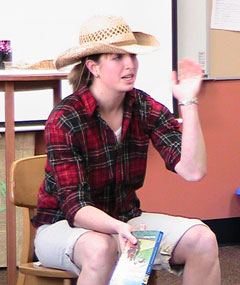 A Drake University senior and former standout on the women’s basketball team is one of 32 Americans selected as Rhodes Scholars for 2009.

Lindsay Whorton learned this weekend that she will receive a two-year scholarship to study at Oxford University in England. There were 769 U.S. applicants. Whorton is Drake’s first Rhodes Scholar in 82 years.

"It’s definitely just mind-boggling in a lot of ways," Whorton told Radio Iowa. "It’s just humbling and a great honor to be a part of that group." Whorton says an English professor and Drake President Dr. David Maxwell encouraged her to apply – and she did so somewhat reluctantly. The 22-year-old says she felt like an "underdog" from the outset.

Whorton said, "I just really believed that if I had the opportunity to study (at Oxford) it would just be because that’s where God wanted me to be. So, I just wanted to take the opportunity and see what would happen." Whorton carries a perfect academic record at Drake and will graduate with majors in English and secondary education. At Oxford, she plans to study social policy and evidence-based social intervention.

"Those things would basically just give me the tools to look at social reform in various capacities, whether that’s working for a not-for-profit organization or advocate politically," Whorton said. "It would really just open the door for me to do a lot of different things." However, Whorton refuses to speculate about her post-Oxford career.

"I didn’t realize that I’d being going to England three years ago, so to speculate as to what’s going to be possible at the conclusion of this experience just seems a little foolish on my part," Whorton said. "I’m just excited to take it one step at a time and see where things go."

Whorton used up her athletic eligibility last season, when she was named a first-team academic all-American. The guard was one of Drake’s team captains and was selected to the All-Missouri Valley Conference First Team. Drake Womens Basketball Coach Amy Stephens also encouraged Whorton to apply for the Rhodes Scholarship.

"She was the one that was really just relentless…letting me know this was something I had to do," Whorton said of Stephens. Whorton is a native of Independence, Missouri and credits her parents for her work ethic and confidence. "I think I would be in a tremendously different place without (my parent’s) influence," Whorton said. "I also had great teachers in high school, who really got me interested in the field of education."

Whorton is student teaching this semester at Valley High School in West Des Moines. On Monday, she dressed up as Huck Finn to introduce the Mark Twain character to students. Whorton will begin attending Oxford University in September 2009. The internationally renowned Rhodes Scholarships were created in 1902 by the will of British philanthropist Cecil Rhodes.