You are here: Home / Agriculture / Iowa Christmas trees set to go to the troops 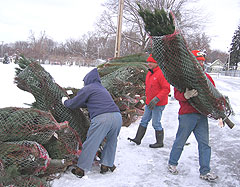 Several Iowa Christmas tree growers made a special trip to Des Moines this morning to deliver trees that will be donated to military troops and their families.

Iowa Deputy Secretary of Agriculture Karey Claghorn helped organize the "Trees for Troops" event at the State Fairgrounds. She says the program is in its 4th year.

Nationwide, between 17,000 and 20,000 trees will be delivered. About 100 of those trees are coming from 31 growers in Iowa, including Jan Pacovsky’s family tree farm in New Hampton. She says the 100 trees from Iowa will be delivered to the Ellsworth Air Force Base in South Dakota.

"We all put a little sign on them saying where the trees come from," Pacovsky said. "We’ve got some nice thank yous back over the years." Pacovsky is executive director of the Iowa Christmas Tree Growers Association , which formed in 1963 and now has nearly 110 members operating tree farms.