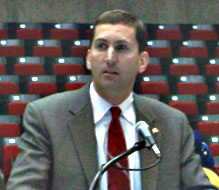 Gene Chizik resigned over the weekend as the Cyclone football coach to become the new coach at Auburn after posting a 5-19 record in just two years at ISU.

Pollard said:"You know we hired coach Chizek for a lot of reasons, but in large part because I saw in him character and values that we saw for the last two years. Up until this last week. I’m having a hard time reconciling those actions with what I’ve seen for the last two years. I understand why he did it, but at the same time I told him on Friday night ‘you can go do that, you don’t maybe ever have to talk to Jamie Pollard again or think about Iowa State again, but I thought based on what I know of you :couldn’t do that’."

Pollard stopped short of saying he felt "betrayed" by Chizik, though he says many of the players feel that way. "I’m I made about it, disappointed, do I feel he betrayed me? I don’t know. You know what, at this point I don’t really care because he can’t help me win or lose another football game and we’re gonna move on," Pollard says, "and he’s got to reconcile with himself what he told all his players, what he told our administration, and what he’s doing now. And if he can live with that, more power to him."

Pollard says there were many positives that came from Chizik’s hiring, including support for the program. He says the excitement that his hiring caused and generated, significantly increased the ticket base and drastically increased the number of donors and donation levels, and they were able to invest over 20 million dollars in the stadium and raise the salaries of the assistant coaches to keep them competitive.

Pollard says the whole process began on December fifth when he received a call from the Auburn athletic director while watching the ISU volleyball team play in the NCAA Tournament. He says he has all the athletic directors in the country on his cellphone and knew when he got a call from the Auburn athletic director what it was about. Pollard says he knew that Chizik was going down Thursday to interview and says he got a voice mail on Thursday night from Chizik to say he wasn’t taking the job. He spoke with Chizek Friday morning and the coach told him he was going to call Auburn and tell them he was out. Between 1 and 5 o’clock Friday he couldn’t get a call or text message back and says he was "smart enough to know what’s going on."

Chzik contacted Pollard on Saturday to inform him he was taking the job at Auburn. Pollard says it is best for everyone to just move on.

"I’m gonna find it in myself to believe that he’s still the person I thought he was. That’s what I told our players, ‘find it in your heart to forgive him,’ doesn’t help ya any more to go forward harboring any ill feelings."

It is an emotional time from everyone associated with Iowa State University and women’s basketball coach Bill Fennelly everyone feels the effects. "You know there’s a lot of people who have invested a lot of time and energy in what Iowa State’s all about, and I look at it like recruiting, we need to embrace and believe and love the people that are hear, and to worry about the people who don’t want to be here, that’s the way I look at it," Fennelly.

Fennelly says he feels bad for those who are associated with the football program. Fennelly says quarterback Austen Arnaud is a very good friend of the family and he feels bad for him and for Jamie Pollard. He says it’s a time when everyone is supposed to be thinking about Christmas shopping, and now they’re going shopping, but for a different kind of thing.