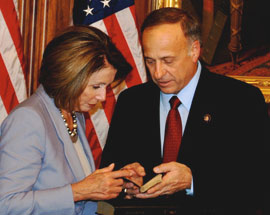 An Iowa Republican who said some controversial things about Barack Obama during the heat of the presidential campaign today made a personal gesture to salute Obama’s role as the nation’s first African American president.

As Congressman Steve King was sworn in for a fourth term, he placed his left hand on a leather-bound copy of the New Testament.

It was the Bible his distant uncle John Richardson of Palo, Iowa, carried in his pocket as he fought on the Union side in the Civil War. "In the Bible itself, there are notes that show that it was presented to him on the eve of his departure for the war on July 27, 1862 and he returned three years to the day from that war, walked home, exactly on July 26, 1865 having lived through three years of conflict," King says.

One of King’s great-great-great-great-great grandfathers fought in the Grand Army of the Republic, too, but he was killed in battle. "There’s a transformation taking place in this country and even though we have philosophical differences, on the 20th of January we’ll be swearing in our first African American president and it strikes me that the people who shed their blood to put an end to slavery — the abolitionists that were radical in their day — paid a tremendous price," King says. "If they could look down on this country today and see an American president sworn into office, that would do their heart proud."

King has been no fan of Obama’s foreign policy or prescriptions for the U.S. economy and last spring, King suggested terrorists would be "dancing in the streets" if Obama were elected president. "Personally, he’s fine. I sense the charisma that he has, but he and I just disagree philosophically," King says. "I have to wish him well and we have to pull together the best we can for this country and I will be challenging him when there are philosophical disagreements, but they are not personal and never have been."

King keeps his distant uncle’s New Testament in a glass case in his office in Washington, D.C.  King recently discovered his distant uncle who fought in the Civil War was buried at a cemetery in Denison, Iowa — after a lifetime of adventure according to the stories King heard passed down through the generations. "One that I remember as he traveled he would sometimes just take off alone and take his gun and go and wander around," King says, "and one of the winters he found himself in northern Minnesota walking across Lake Mille Lacs. That’s one of the largest lakes in Minnesota and he was lost in a blizzard out on the ice and as he stumbled along he wandered into a camp of Indians…and always credited them with saving his life."

When President-elect Obama is sworn into office later this month, he’ll use the Bible Abraham Lincoln used for his first inaugural in 1861.