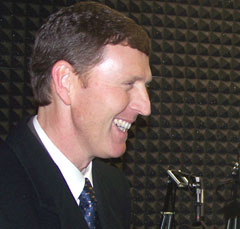 A northwest Iowa Republican who’s run for governor twice before plans to run again in 2010.

“In 2002 we shocked everybody by narrowly losing the Republican primary. In 2006 we were nominated to be our party’s lieutenant governor nominee and in 2008 we won with Governor Huckabee with our network after being outspent 15-to-1,” Vander Plaats says. “We think 2010 is going to be a great year for us to not only win the primary, but to win the general election.”

Democratic Governor Chet Culver has made it clear he’ll seek re-election in 2010. Vander Plaats says Culver’s fiscal record will be difficult to explain to Iowans. “They see a governor who’s expanded state government by over $900 million in just two years and now we have an economic downturn and it seems like everybody’s in crisis and his best idea yet, which he just took off the table, was to sell the state lottery,” Vander Plaats says.

Vander Plaats, who is 45 years old, wrote a book that was published in 2007 and titled “Light from Lucas.” The book’s about his family’s experience with their severely disabled son.

Vander Plaats has a new campaign website — www.teamvp2010.com  — and he’s registered his 2010 campaign committee with the state Ethics and Campaign Disclosure Board. Vander Plaats stopped by the Radio Iowa studios in Des Moines this morning for an interview.