You are here: Home / Fires/Accidents/Disasters / Memorial marks 50th anniversary of the "Day the Music Died" 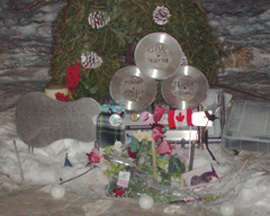 With an air temperature of three-below and a wind chill of 27-below, about 20 people gathered last night around a bonfire at the monument that lies in a cornfield north of Clear Lake.

They honored the lives of Buddy Holly, Ritchie Valens, the Big Bopper and pilot Roger Peterson, who died after their plane crashed after takeoff from the Mason City Municipal Airport shortly after 1 o’clock in the morning on February 3rd, 1959.

The Surf Ballroom’s Jeff Nicholas led the memorial service. Nicholas says, "People from around the world traveled to the Surf Ballroom to pay homage." He says this week’s events were exhausting and thrilling.

"It’s been a celebration. It’s been a little bit bitter-sweet," Nicholas says. "It’s been very emotional for those of us involved at the Surf but the fans that come from the world over really buoy our spirits and we’re hopeful everything we did this week was very respectful and in the spirit of celebration." Nicholas says the concert was a wonderful way to cap off the week.

Nicholas says it was a moving moment to see dedicated fans come out 50 years ago to the moment of the plane crash to celebrate the lives of Buddy Holly, Ritchie Valens, The Big Bopper, and pilot Roger Peterson. 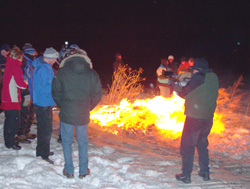 "The people that are out here have got an awful lot of heart and it’s just incredible," he said. Claire Richardson traveled from Chino Hills, California, to be at the memorial site early this morning. Richardson says it’s not his first time to the Winter Dance Party festival.

The group broke out into Don McLean’s "American Pie," which laments the deaths of the singers. The trip out to the memorial came after the Surf’s biggest concert ever.

Last night’s headliners included Graham Nash, Bobby Vee and Los Lobos. Some 1,800 people packed the ballroom, some coming from as far away as England and Switzerland.