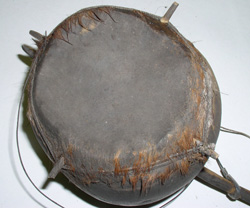 For the first time since the floods hit last June, some damaged artifacts are being returned to a Cedar Rapids museum.

On Tuesday, the Conservation Laboratory at the University of Iowa sent 31 items back to the African American Historical Museum and Cultural Center of Iowa.

Nancy Kraft, head of preservation at U-I Libraries, says one of the biggest tasks involved restoration of gourd drum which has ties to an ethnic group that was wiped-out in the Liberian Civil War. "It was completely covered in mud and muck," Kraft said. Cleaning the drum’s outer shell, skin top and feather edging involved 40 hours of work.

The process involved loads of cotton swabs and spit. That’s right…spit…human saliva. "It breaks down the dirt in a safe way," Kraft explained. "It’s kind of funny…I guess you can buy manufactured spit, but we’re using our own." The other items returning to the museum include Liberty Coins from the 1830s, several feathered fans, baskets and a mat woven by George Washington Carver. 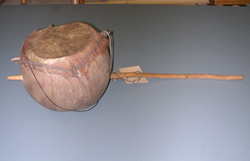 The U-I Conservation Lab is continuing work on other flood damaged items from the African American Museum, as well as artifacts from the National Czech and Slovak Museum and Library in Cedar Rapids and the Johnson County Historical Society.

Kraft estimates it will take at least two more years before the bulk of the restoration efforts are finished. Officials have not been able to determine a price tag on all the work – primarily because they’re still trying to decide what items can be salvaged and what pieces will be lost.