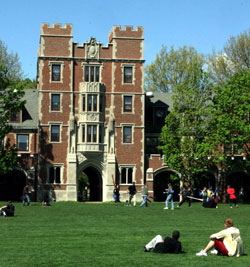 An Iowa city located along Interstate 80 is one of 22 finalists in a contest sponsored by a popular travel website. The editors of BudgetTravel.com selected Grinnell out of more than 150 nominations for the distinction of "Coolest Small Town in America."

Bill Menner, executive director of Poweshiek Iowa Development, nominated Grinnell. He says the rules state the towns must have populations under 10,000 and editors said they would give preference to "quirky, edgy communities" rather than quaint, small towns. "I think quirkiness was important," Menner said. "I think Grinnell’s spot as a college town, with a really diverse student population, definitely helped us." Budget Travel editors also said they were looking for communities with a high quality of life, plus thriving arts, culture, dining and recreational opportunities.

Online voters will now decide among the 22 finalists by selecting their favorite town among regional qualifiers. Grinnell’s region includes towns like Mineral Point, Wisconsin and Port Austin, Michigan. No other Iowa community is among the finalists, so Menner is hoping all Iowans will cast a vote for Grinnell. It’s not clear when online voting will end and a winner will be named. "All they’re saying is they’re going to give us some lead time before they close the voting and announce the winners," Menner said.

The city that’s named "Coolest Small Town in America" won’t win anything other than some free publicity. Menner is hoping Grinnell will win the Midwest regional competition and be featured in both an online story and in the pages of Budget Travel magazine. According to the website, the magazine will publish an article about the "Coolest Small Towns in America" in the October issue.

Visitors to the website are asked to vote, leave comments, and even post photos and videos of their favorite town. As of late Wednesday afternoon, Grinnell was in third place in the online voting behind Owego, New York and Huntingdon, Pennsylvania.