You are here: Home / Outdoors / DNR says don’t send your old TV to the landfill 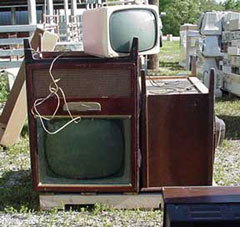 Thousands of Iowa households have analog televisions that Department Natural Resources officials are hoping don’t end up in the landfill.

Now that TV stations are making the switch to all-digital programming, many Iowans are choosing to buy a new TV rather than purchase a converter box for their old analog set.

Tom Anderson, with the D.N.R., says those TVs are full of toxic heavy metals.

The picture tubes, for example, may contain ten or more pounds of lead. If disposed of in a landfill, the materials can contaminate land and water resources. Anderson is encouraging Iowans to recycle their old TVs. The D-N-R’s website has a list of facilities that accept televisions for recycling.

Anderson says you can find the list by visiting the Waste Management section of the website and clicking on the green "TV recycling" icon. "Some communities are having special collection events. Of those that we know about, we’ll have (on the website) as well as the ongoing collections," Anderson said.

Fees for recycling televisions vary by facility, but are usually based on the TV’s size and weight. Anderson say most recycling centers will charge between 10 and 15 dollars for the average television. The federal government recently delayed the mandatory switch to all-digital programming until June 12th, but a number of TV stations in Iowa have already made the transition.