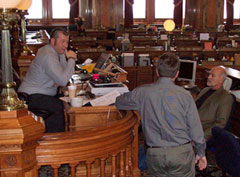 A handful of legislators staged an unusual vigil at the statehouse all weekend that continues at this hour.

A union-backed bill got just 50 "yes" votes on Friday afternoon in the Iowa House. That’s one vote short of what’s necessary to pass a bill. Rather than declare the bill defeated, House Speaker Pat Murphy — a Democrat from Dubuque — decided to keep the voting machine open until one o’clock Monday.

Representative Polly Bukta, a Democrat from Clinton, says House Democrats have suffered a "serious blow" to their "egos."

"You know when you’re counting on the votes and then you’re one short when the voting is tallied, that’s a very disappointing thing to have happen," Bukta said Saturday. "And we did have 51 votes when this thing started."

Bukta was among the handful of Democrats who stayed in the House and took turns sitting in the speaker’s chair so Murphy could take a break. Bukta did the first overnight shift, from 7 p.m. Friday to 4 a.m. Saturday. "You never know what you’re going to get into when you sign up to be a legislator," Bukta said Saturday, laughing. "Lots of things can happen."

Representative Linda Upmeyer, a Republican from Garner, was among the few Republicans who stayed all weekend to keep an eye on the voting board. "The House is in session, so somebody needs to be here," Upmeyer said Saturday afternoon. "The board’s open. The board cleared, a little while ago — timed out."

The voting board is run by computer and it crashed Saturday morning and again on Sunday morning, wiping out all the votes. Upmeyer joked that the machine was staging a protest.  "It was tired. It had to time out," Upmeyer said, laughing. "Enough! Done!" On Friday night the chief clerk wrote all the "yes" and "no" votes down by hand and the votes to be punched back into the computer when the voting machine crashed.

Republicans aren’t questioning Murphy’s decision to keep the voting machine open for over 60 hours. "He has that authority and that right and I’m sure he has reasons that he has no obligation to discuss with me or any of us," Upmeyer said, "so it’s fine. It is what it is."

Murphy issued a written statement on Friday night and declined Radio Iowa’s request for an interview this weekend.

Among the five Democrats who voted against the bill, Representative McKinley Bailey — a Democrat from Webster City — was considered a potential supporter if an amendment he sought was included in the bill. But Bailey’s amendment was not attached to the bill, and he voted no. Bukta says she and other Democrats are disappointed in Bailey. "Not so much disappointed in his vote, but disappointed that we were led to believe that he would vote for it and then (he) didn’t," Bukta said. "That’s the disappointment."

Bailey has not responded to Radio Iowa’s request for an interview. Bailey told a Des Moines television station on Sunday afternoon that he stopped checking his voice mail and email messages over the weekend, and does not intend to change his vote from no to yes.