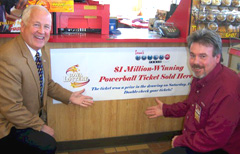 The identity of the person who purchased a one million dollar winning Powerball ticket in Marshalltown for Saturday night’s drawing is still not known. The winning ticket was purchased from a Kwik Star convenience store in Marshalltown.

Store manager Tracy Unker tells how he found out about the Powerball winner. He says they received a call from the Iowa Lottery about 10 o’clock Sunday saying they had sold the million-dollar winner. Unker says they’re anxious to find out the name of the winner.

Unker says no one has come in yet, and they are hoping that it is someone locally that won. This is the second one million dollar winner in Iowa since Florida joined the Lottery early this year. Lottery Director, Terry Rich, says the person chose the Powerplay option, which automatically made the prize one million dollars when the ticket matched all five numbers on the white balls drawn.

Rich has these instructions for the winner. Rich says they should bring the ticket to the Iowa Lottery headquarters in Des Moines and they have a check ready. The Powerball Jackpot of $130.4 went unclaimed. The Marshalltown ticket was the only one in the national drawing.

(Photo courtesy of the Iowa Lottery)