You are here: Home / Crime / Courts / Iowans able to save homes through Mortgage Hotline 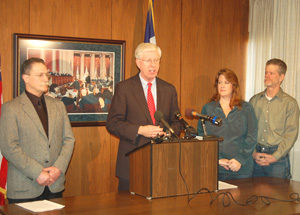 Some Iowans who were at risk of losing their homes to foreclosure are encouraging others facing that situation to call a hotline for help.

John says his new landscaping business was struggling because of the wet weather. The couple received an "intent to foreclose" notice before they called the Iowa Mortgage Help Hotline.

That led to a meeting with a consumer credit agency. "We took all our paperwork in and they worked out a budget and showed us where we need to improve and what we need to do," Maureen said.

Eventually, a negotiator helped reduce their interest rate, set their back payments to the end of the loan and cut their monthly payments by $112 a month. The Nixons spoke Tuesday at a press conference, called by the Iowa Attorney General, to mark the one-year anniversary of the hot-line. Steve Foster of Des Moines also talked about his experience with the service.

"I had an 80-20 loan, which was 9.35% and they had that reduced to 5.25%…and a 12% loan that was reduced to 6%," Foster said. "Through them negotiating, I have saved my home." The Iowa Mortgage Help Hotline was created with a $1.5 million dollar federal grant to the Iowa Finance Authority.

Since it’s inception in February 2008, the hotline’s operators have taken an estimated 5,500 calls and received 3,700 applications. Iowa Attorney General Tom Miller believes about one-quarter of the applications have resulted in loan modifications, but says most of the cases are still in progress.