You are here: Home / News / Legislator wants a "free" option for handicapped parking 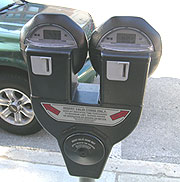 Representative Steve Lukan wants to give handicapped drivers a “free” option if they cannot find a parking space designated for the handicapped.

Lukan’s proposal would let drivers with a handicapped permit park at a metered parking space for free.

“There are some instances where people don’t have designated disabled parking nearby some locations or possibly those locations are filled,” Lukan says. “This would help a lot of those people, give them access to that metered spot, without a charge.”

Lukan, a Republican from New Vienna, says he’s visited with a few handicapped Iowans who’ve had difficulty finding adequate parking in cities. Lukan tried, but failed to get the Iowa House to attach his proposal to another bill Monday.

Lukan vows to try again to keep his idea alive, but the bill he proposed on this subject failed to pass a deadline last week so his only option now is to try to piggyback his proposal on another bill and it’s doubtful he’ll succeed.