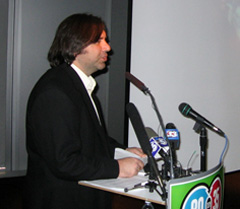 One of the biggest hip-hop acts in the history of the music genre will be performing in Iowa this summer. Organizers of the 80/35 Festival in Des Moines announced that Public Enemy will headline the event on Friday, July 3. Amedeo Rossi, 80/35 project manager, unveiled a handful of the top acts Tuesday that will play the outdoor festival in downtown Des Moines. The line-up includes Ben Harper and Relentless 7, G. Love and Special Sauce, Stephen Malkmus and The Jicks and Matisyahu.

For more information about the July 3rd and 4th festival, visit www.80-35.com .