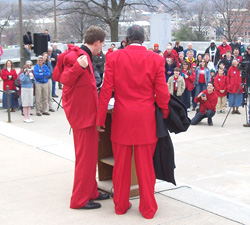 There was more drama today at the Iowa capitol over the gay marriage issue, with opponents of same-sex marriage angrily shouting at legislators in the House of Representatives.

The top Republican in the Iowa House tried but failed to force legislative action on a resolution which calls for a statewide vote on a constitutional amendment that would ban gay marriage.

Opponents of gay marriage who were in the House balcony, watching the proceedings, immediately started chanting.

"Let’s us vote," they repeated. A House officer advised the crowd: "The chief clerk would remind people in the gallery that demonstrations are not permitted in the House gallery."

House Speaker Pat Murphy, a Democrat from Dubuque, is the one who ruled the vote in the House would not occur today. "The bottom line is we’re not going to let ‘mob rule’ rule this state," Murphy says. "This demonstration in the gallery today, granted we were out of session, but it was wrong. They want to do this, they can take a rally outside. There’s no reason for this type of behavior here and we’re not going to put up with it. Period."

At 8:30 this morning, both opponents and supporters of gay marriage gathered in separate sites just outside the statehouse. About 300 people on the west steps of the capitol prayed and cheered as a Baptist minister and a leading opponent of gay marriage who were dressed in identical red suits led a rally. 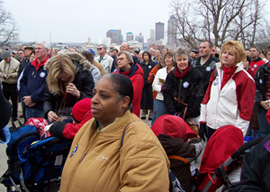 Hurley challenged legislators who’re blocking a vote as well as Governor Culver to reverse course and support a constitutional amendment that would ban gay marriage. "We will not give up until our hired servants who we elect and diselect and whose salary we pay….let us vote," Hurley said.

An Iowa Supreme Court ruling issued last Friday legalizes gay marriage here and Hurley urged the crowd to take action in the voting booth in November of 2010 and remove three of the justices from office. "We will remember, next November," Hurley chanted.

Reverend Ratliff, who is head of the Iowa/Nebraska chapter of the NAACP, rejects the notion the gay rights movement is akin to the civil rights movement for blacks. For five-and-a-half minutes, Ratliff led this morning’s crowd in prayer.

"Let them understand, oh God, is that your way is the way that we must live, that separation of church and state did not mean that man should live unholy," Ratliff prayed. 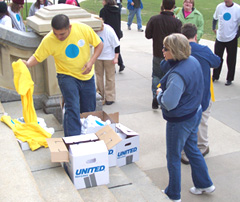 A few dozen gay rights activists gathered on the south side of the capitol at 8:30 this morning.

Ryan Crane, a local organizer for the "One Iowa" campaign, advised them not to clap, cheer or even speak while they were in the House chamber to watch today’s drama unfold.

"The opposition will almost certainly outnumber us, but not to worry," Crane said.

Wendy Vasquez of Des Moines was among those wearing a t-shirt with one dot to symbolize the "One Iowa" campaign. "My brother is gay and he’s been with his partner for, like, 20 years and they have the most wonderful relationship I’ve ever seen," Vasquez says. "Why I can be married and he cannot is beyond me."

A Radio Iowa reporter tried to interview opponents of gay marriage as they filed out of the House chamber this morning, but they refused to give their names.