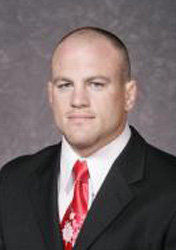 "Cael (Sanderson) shared with me today that he has accepted the head coaching position at Penn State. I am extremely saddened for our institution’s student-athletes, staff, alums and fans.

It is a difficult day for all Cyclones as we cope with the departure of a truly outstanding and accomplished student and coach. Cael’s unblemished collegiate record, Olympic glory and promising start as a coach all came while he was representing Iowa State University and he will forever be recognized as a Cyclone."

"During the last week, Cael and I talked numerous times and we had several in-depth and personal discussions about this decision. Those talks included me asking what, if anything, could we do to keep him at Iowa State.

I also asked President (Gregory) Geoffroy, Bill Fennelly and Greg McDermott to reach out to Cael and they all did so. In the end, Cael said that he appreciated everything Iowa State and our fans had done for him but he believes winning a national championship will be easier at Penn State.

"I know this has been a very challenging and emotional decision for Cael and his family. I encourage all of our fans to put aside their disappointment and, instead, respect Cael for making a decision that he believes is in the best interest of his family. We are sad to see him leave, but we certainly wish him the best."


"We will begin a national search for his replacement immediately and focus our full attention on identifying and recruiting a new coach who can add to the Iowa State championship legacies of former coaches Hugo Otopalik, Dr. Harold Nichols and Jim Gibbons."

Sanderson went undefeated in his collegiate carreer at Iowa State in winning four national championships. He also won a gold medal in the 2004 Olympics. Sanderson took over as Iowa State’s head coach in 2006 following the retirement of Bobby Douglas.