You are here: Home / Outdoors / Obama visits Iowa for first time as President 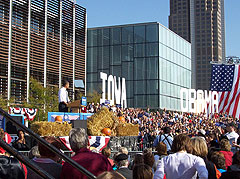 President Obama is due in Iowa today  to mark Earth Day with a visit to a plant in Newton that makes the towers for wind turbines.

Van Jones, an advisor to the president, is a member of the White House Council on Environmental Quality.

"It’s really in some ways an Earth Day like no other. It’s the first Earth Day of the Obama era," Jones said Tuesday afternoon during a conference call with reporters. "…The debate about whether you could do right by the environment and right by the economy at the same time is over. We have a president who has a commitment to restoring our economy by restoring our environment through a serious effort to create millions of ‘green jobs’ across the country."

Jones is the author of a best-selling book titled "The Green Collar Economy" and he is the founder of a group called "Green for All."

"Under the Obama era, Earth Day is for everybody," Jones said. "Earth Day is certainly for those of us who are concerned about the natural world and the environment in the traditional sense, but Earth Day is also for the laid off workers who are going to be reemployed in manufacturing wind turbines and smart batteries and solar panels."

Trinity Structural Towers occupies part of the former Maytag plant in Newton where washers and dryers were once made. Maytag, at its peak, employed 3,900 workers in Newton. About 300 now work at a new plant in Newton, making the huge blades for wind turbines, while about 140 people are working at the renovated facility Obama will tour, building the towers for wind turbines.

According to Jones, there’s money in the federal economic stimulus package for renewable energy companies."The president has, you know, made a commitment that he wants to turn the corner and make clean energy the profitable kind of energy in the United States," Jones said.

Obama will tour the plant in Newton early in the afternoon, then he’ll speak at an invitation-only event in Newton. None of Obama’s stops in Iowa today are open to the public. It is Obama’s first trip to Iowa since he was elected president.