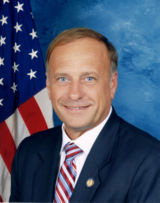 "You know, honestly, I’ve never brought the subject up about running for governor, but I have answered a lot of questions and I answered a question…I believe it was April 3, the day that this Supreme Court opinion came out — and the quesiton was, directly, ‘Does this make it more likely that you run for governor?’ The answer is just an analytical answer, ‘Yes, by degree,’" King said.

"But the question then becomes ‘How much of a degree?’ And I’ll just say that which has unfolded in the last three weeks makes me neither less or more likely to run for governor."

According to King, his "personal ambitions" have been satisfied "long ago" with his election to the state Senate, then to Congress. King, who represents the western third of Iowa, suggests he wants to "mobilize Iowans" on the issue of traditional marriage and that’s why he’s paying for polling in eastern Iowa.

Tonight’s edition of "Iowa Press" featuring Congressman King airs at 7:30 and is rebroadcast Sunday at 11:30 a.m.