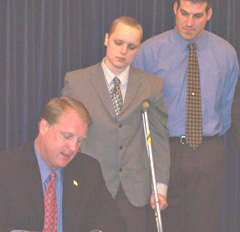 The governor has signed a bill into law, ensuring Iowans who have health insurance and need an artificial limb will get it paid for through their policy.

hat used to be standard in the insurance industry, but legislators say in the past decade many policies have begun limiting the amount that can be spent on prosthetics.

Twelve-year-old Drew Wall of Cedar Rapids was diagnosed with bone cancer in February of 2008. He had a leg amputated and this year he’s been lobbying legislators to pass this bill.

Twenty-nine-year-old Nick Ackerman of Davenport caught meningitis when he was 18 months old and both his legs had to be amputated.

"Having insurance coverage, I was always able to get prosthetics growing up and to stay active," Ackerman says.

While Ackerman was a student at Simpson College, he won an N-C-A-A wrestling title in 2001. He now works for a company that makes artificial limbs.

"I felt that there was an opportunity to help a lot of people and to not do anything special, just have them see what I’m doing or what I’ve done and see that it’s not a big deal, given that you have the right equipment to do it," Ackerman says.

Representative Bob Kressig, a Democrat from Cedar Falls, says some insurance policies were placing a lifetime limit of $50,000 for prosthetics, and kids like Ackerman and Wall need much more than that just in their formative years.

"You know, I know of no one that has had their leg removed to get a prosthetic. It’s a definitve necessity," Kressig says. "…To limit that coverage through insurance policies, I think, is wrong, so this is a happy day for me. It really is."

"I think that the reason all of us are in public service, working here at the capitol, is because of people like Drew and Nick. I mean, this is really good public policy," Culver says. "Too often, we find areas where we disagree on legislation or areas of public policy, but this is a great example of a bipartisan effort to do the right thing."

Click on the audio link below to listen to the entire bill signing ceremony and comments from both Drew Wall and Nick Ackerman.