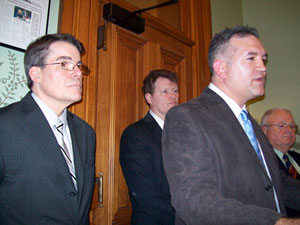 Final action on a more than $6 billion state budget plan and allocation of millions from the federal government’s economic stimulus package were among the final agenda items for the 2009 Iowa Legislature.  The House adjourned for the year at 5:04 a.m. Sunday.  After paperwork from the House was transferred to the Senate and senators took final action on a handfull of bills, the Senate adjourned at 5:56 a.m.

"You know, I feel really good about the fact that we got this done. It is clearly a victory for the people of Iowa," Culver told reporters. "It was my signature legislative item this session."

In addition, Culver asked Democratic legislative leaders to use more of the federal economic stimulus money to avoid layoffs in state government and in local public schools.

Senate Democratic Leader Mike Gronstal of Council Bluffs says a compromise was reached late Saturday to plug in about $37.5 million more to keep people employed at community colleges, the state universities and local schools as well as in state government.

Senate President Jack Kibbie, a Democrat from Emmetsburg, says Iowans may not realize the impact that federal stimulus package has had.

"The stimulus is what’s getting us out of here," Kibbie says. "The funding for health care and education — withou that, we’d be gnashing our teeth here."

But Republicans like Senate G.O.P. Leader Paul McKinley of Chariton have repeatedly argued for deeper cuts in state spending and have been overruled by Democrats.

"And we’re looking at deficits down the road," McKinley says. "As a matter of fact, the spending is so high — particularly with the federal bailout money — that could see the train come off the track in a couple of years."

But Democrats like House Speaker Pat Murphy of Dubuque paint a different picture of the budget.

"We actually spent $270 million less than what we did last year, We balanced our budget without raising taxes on middle class families," Murphy says. "Along with that, we kept $480 million in our rainy day accounts."

House Republican Leader Kraig Paulsen of Hiawatha faults the legislature’s top two Democrats for preventing a move to schedule a statewide vote on a constitutional amendment which would ban gay marriage.

"It seems to me Iowans deserve an opportunity to weigh in on that," Paulsen says.

This Monday, April 27,  Iowa Supreme Court ruling which legalized gay marriage takes effect and same-sex couples plan to go to some of the county recorders’ offices around the state to apply for marriage licenses.