You are here: Home / Politics / Govt / Clergy talk about both sides of same-sex marriage 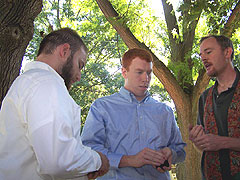 The reverend who officiated Iowa’s first gay marriage says he is scheduled to officiate another 15 to 20 same-sex ceremonies through July.

Mark Stringer of Des Moines helped marry two college students from Ames during a brief window opened by a lower court ruling in August of 2007.

An Iowa Supreme Court ruling earlier this month cleared the way for gay couples to begin receiving marriage licenses today. Stringer says his church was one of the first Unitarian churches in the country to support gay rights. "For me, it was part of my core beliefs to want to see couples have the same benefits for their commitment that my wife and I enjoy," Stringer said.

Most of the ceremonies Stringer has scheduled will be short affairs where he will say a few words and then sign the marriage license.

He says most of the couples he’s scheduled to marry have been together for 10, 20 or 30 years. "They’ve made their relationship formal in their own minds, even if the state didn’t recognize it," Stringer said. "So, for them, it’s kind of a formality. It’s simply the legal action of signing the paper that, in my opinion, they should have been able to sign years ago."

Stringer says his phone has been ringing ever since the Supreme Court’s ruling on April 3rd. "To be honest, it’s complicating my life," Stringer said with a laugh. "But, I feel so strongly about it and I know that I’m one of a handful of people who will do (same-sex marriage ceremonies). I’m kind of seeing it as mostly a benefit to my own spirit to be able to be the person that helps these couples achieve the legal status that I think they’ve always deserved."

Catholic leaders in Iowa have said they feel the gay marriage ruling will harm families and children. Monsignor Frank Bognanno of Christ the King Catholic Church in Des Moines says he addressed the issue in a sermon the Sunday after the court decision. He feels it could open the door to legalized polygamy.

"That is, if I fall in love with someone of the same sex and have the right to marry – why don’t I have a right to marry two or three people of the opposite sex," Bognanno said. Stringer and Bognanno obviously have a different interpretation of what’s presented in the Bible.

Bognanno says, according to the Catholic religion, God clearly stated that marriage should be between one man and one woman. But, Bognanno says gay marriage is not just a religious issue. He notes that atheistic cultures are also opposed to same-sex marriage. "They do not believe in God, but they do believe that the one man, one woman marriage is the best (way) to raise children as a strong foundation for their society," Bagnanno said.

While homosexuality in itself is not considered a sin in the Catholic religion, Bagnanno says homosexual acts are considered a sin. "So, for example, it would be a sin for me not to hire someone for a position in our parish simply on the one issue that they happen to be same-sex oriented," Bagnanno said.