You are here: Home / Fires/Accidents/Disasters / "Not a time for alarm" but swine flu cases expected in Iowa 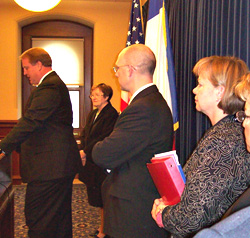 Governor Chet Culver held a news conference in his statehouse office this afternoon to discuss the situation.

"This is not a time for alarm," Culver said as he read from a prepared statement, "rather, this is a time for prevention and for caution."

The strain of "swine influenza A" has sickened nearly 2000 people in Mexico and about 100 people are believed to have died from the virus. Cases of swine flu have been confirmed in five of the 50 states, but no one in the U.S. has died from swine flu.

Iowa Department of Public Health director Tom Newton is urging Iowans who believe they have the symptoms of swine flu to call their doctor.

"We don’t want you just showing up in an emergency room, or just showing up at your a doctor’s waiting room," Newton said. "We want to make sure that people are calling ahead, touching base with their health care providers, consulting with them about what their symptoms are. If they have recently traveled from one of the locations that has confirmed cases, they may work out a deal with their health care provider which wouldn’t expose them to everyone sitting in the waiting room."

The main symptoms include a fever of more than 100 degrees, cold sweats and severe coughing.

"We’re not just talking about a running nose. There are a lot of allergies going around right now, but we’re not talking about that," Newton said. "People would be feeling fairly sick."

Newton indicates it’s not a question of if but when cases are confirmed in Iowa.

"I think there’s pretty good potential that we will have cases in Iowa based on the information that we’re getting," Newton said. "…The (Centers for Disease Control) has indicated to us that there are ongoing investigations all across the country and they anticipate there will be more states that have confirmed cases in the near future."

The State of Iowa currently has enough doses of an anti-viral medication called TAMIFLU to treat over 400,000 Iowans.  "And TAMIFLU has shown some effectiveness (in treating) the swine flu that is circulating," Newton said.

There is no vaccine for swine flu, so getting a flu shot won’t protect you according health officials.

Kansas is the closest of the five states where swine flu cases have been confirmed, and Newton points out the two cases there can be traced to Mexico.

"From what we understann…from the information the C.D.C. has shared with us it was an individual who made a three-day trip to Cancun, spent some time in the…Mexico City airport…and then his wife, consequently, also came down with swine flu," Newton said.

The governor made a point of repeating that one gets swine flu from coming in contact with someone who has the virus; you cannot get it by eating pork. Deputy State Ag Secretary Karey Cleghorn was at today’s news conference.

"The swine herd in the state of Iowa is healthy," Cleghorn said.  "We haven’t had any (cases) of this particular strain reported (on Iowa farms)."

Lieutenant Governor Patt Judge spoke briefly at today’s news conference, but had to step away from the microphone because of a coughing fit.

"I do not have it," Judge told reorters as she gasped for breath.  After the news conference, Judge said she was suffering from springtime allergies.

Click on the audio link below to listen to the entire news conference.