You are here: Home / Politics / Govt / State workers who died on the job remembered 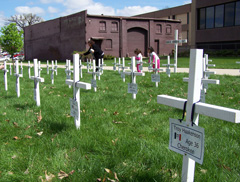 tate officials held a ceremony today in Des Moines to honor the 65 workers who lost their lives over the last year while on the job.

Family and friends of the victims heard from several speakers while sitting near 65 white crosses that were placed in a grassy area across the street from the capitol building.

Debi Stoneburner of Woodward took home the cross bearing her son’s name, 19-year-old Brian Stoneburner. "He was an amazing kid," Debi told Radio Iowa as she fought back tears. "He was 19 and just loved life…didn’t have any enemies. He raced race cars. Last year was his first year and he won three races."

Debi and several other family members wore shirts that included pictures of Brian and his race car. The 2007 graduate of Woodward-Granger High School was killed in a construction zone crash in September of last year.

A semi hit and killed Stoneburner, along with another worker, 48-year-old Jeffrey Hiatt of Huxley. Two more workers were injured in the incident along Interstate 35 north of Story City. The men were working for Iowa Plains Signing of Slater. Debi says motorists should pay special attention and slow down in construction zones. She admits the family is struggling to deal with Brian’s death, but they’re taking "one day at a time." 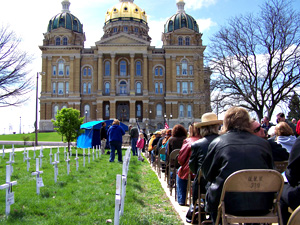 Ken Sager, president of the Iowa Federation of Labor, says – on average – 15 workers are killed nationwide everyday, while 10,000 are injured.

"That’s too many. One is too many," Sager said. "We have to do more to improve workplace safety and prevent the accidents and illnesses that are disabling workers and the fatalities that are taking loved ones from us."

The Workers Memorial Day ceremony is scheduled every year on the anniversary of the enactment of the Occupational Safety and Health Act in 1970. Sager says many of the accidents happening in Iowa could be prevented. "Let us commit to do better," Sager told the crowd. "Let us commit to struggle to improve workplace safety and let us look forward to a day when Workers Memorial Day is a day to celebrate life."

State Labor Commissioner David Neil read the names of the 65 Iowa workers that were killed while on the job in 2008. He said this is the first year during his tenure that no Iowa soldiers were killed. "That will not be a fact next year though as we know we have lost two (soldiers) this year already," Neil said.

Many of the worker deaths this past year were blamed on motor vehicle accidents, falls, electrocutions or collapsed trenches. Families of the victims were presented with small plaques by Governor Culver. The ceremony ended with a military gun salute, a bagpiper playing "Amazing Grace" and a trumpeter playing "Taps."