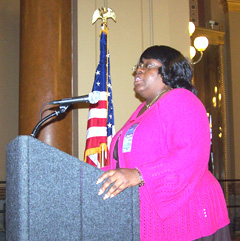 The names of nearly 100 people who were killed last year in criminal acts in Iowa were read aloud today at a statehouse ceremony.

The gathering in the capitol rotunda was part of National Crime Victims’ Rights Week. Lynetta Hall-Parrott of Chicago spoke about her daughter’s death on July 27th, 2008.

Twenty-seven-year-old Lacrissa Davis was shot by her boyfriend, Tony Hayes, while she was working at a convenience store in Ames. Hall-Parrott recalled receiving the news. “If you’ve ever had the wind taken out of you, multiply that by a hundred,” Hall-Parrott said. Hayes committed suicide when he was stopped by Ames police after a brief high speed chase.

Hall-Parrott says she didn’t realize at the time that her daughter was in an abusive relationship. “It was a sad day for us on July 27th, but because of July 27th, I’ve been able to speak to a lot of women that have been in domestic violence situations. I’ve helped several women to leave their situation and not go back, so I’m glad about that,” Hall-Parrott said.