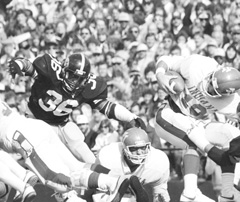 Larry Station, the former University of Iowa linebacker who compiled nearly 500 career tackles and twice was named consensus All-American, has been elected to the College Football Hall of Fame.

Station is the 14th former Hawkeye player or coach to earn the honor and the first since Hayden Fry in 2003.

Station had 492 career tackles – the most in Hawkeye history.