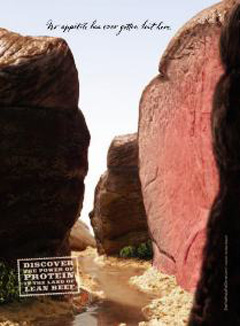 Cattlemen’s Associations from seven Iowa counties around the state are hoping to get the city folks who live in Iowa’s largest metro area to buy more beef.

The group, which includes cattlemen from far southwest and northwest Iowa, has spent money on some "outdoor advertising" according to Terri Carstensen, a beef producer from Odebolt who is a member of the Iowa Beef Industry Council.

"This year we’ve put up eight billboards and we’re using the ‘Beefscapes’ or also the one that (says) ‘There’s No Such Thing As A Chicken Knife’ billboard this year, so there’ll be a kind of a variance of those," she says.

"We are targeting our consumer in the Des Moines metropolitan area." Cattlemen Associations from Adair, Dallas, Ida, Madison, Polk, Ringgold and Sac Counties and the Iowa Beef Check-off are sponsoring the billboard campaign. It’s timed for May because that’s the traditional start of the outdoor grilling season in Iowa.

"We’re going to probably reach about 80% of the area, and that’s going to be about maybe two million impressions," she says. "That’s going to be great advertising for us." Carstensen — who is a member of the Sac County Cattlemen’s Association, too — says the billboards went up May 4th.

In addition to the "There Is No Such Thing As A Chicken Knife" billboard, the "Beefscapes" billboards feature slabs of beef which, when cut, resemble parts of the natural landscape, like cliffs or a canyon. Iowa ranks fifth among the 50 states in cattle raising.

See all the beef advertisements here .