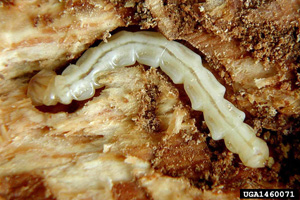 A bug that’s feared for the way it attacks and destroys ash trees has been found for the first time in the state.

Department of Natural Resources forester Paul Tauke says the larva from an emerald ash borer was found in northeast Iowa’s Clayton County in a sentinel tree that was purposely distressed to attract the pest.

Tauke says federal officials confirmed the single larva was an emerald ash borer and a team was then sent in to see if the problem was widespread. They checked other sentinel trees and haven’t been able to find any other ash borers. He says it could be that the pest was been brought in on firewood from Wisconsin, or the beetle laid eggs, or it maybe its the edge of an infestation that hasn’t been found yet.

The tree is in the Osborne Welcome and Nature Center — which is about 60 miles from a know infestation of the emerald ash borer across the border in Wisconsin. Tauke says the D.N.R. has put up traps in a five mile radius of the infected tree to try and determine if there are more ash borers out there.

He says if an infestation is found, the state could institute a quarantine that would prevent any firewood from coming out of the county and any ash logs would have to be de-barked and have a half inch of wood removed all the way around. the borer kills all ash species by larval burrowing under the bark and eating the actively growing layers of the trees.

Tauke says the goal if an infestation is found is to slow its spread as much as possible. Tauke says the U.S. Forest Service and U-S-D-A are working on some potential bio-controls that could limit the emerald ash borer population and then maybe limit some of its destructiveness.

Officials from the Iowa Department of Agriculture, the D.N.R., and Iowa State University Extension will be hosting two public meetings on Tuesday, June 16th at the Osborne Center to talk with residents about this discovery.

The officials will meet with timber industry representatives one p.m. and then host a public meeting for residents that evening at 6:30 p.m. Clayton County is one of the top producers of forest products in Iowa. The county has an estimated 66 million woodland trees and an estimated 6.6 million ash trees. To learn more about pest visit www.IowaTreePests.com .