You are here: Home / Agriculture / Sweet corn could be ready by 4th of July 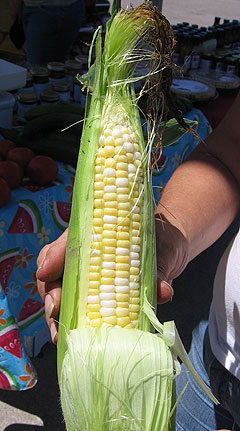 A homegrown Iowa favorite appears to be on schedule to be ready for the first big summer holiday.

You can find sweet corn in grocery stores from other states, but for most in Iowa it pales in comparison to the melt-in-your mouth sweet variety grown locally.

Iowa Ag Department Horticulturist Mike Bevins says there were some early concerns about the Iowa crop.

Bevins says using the plastic can be a big gain for growers as the early crop generates lines of people willing to pay a premium price. But, he says the gamble sometimes doesn’t pay off. He says those using plastic take a big risk because there are a lot of years where they don’t get a crop because the seed doesn’t germinate as the temperatures didn’t get warm enough and the seed rots in the ground. Those are years where they take a big financial loss.

Iowa is know for its ability to grow corn, but sweet corn is a just small part of the crop. Bevins says the last Ag census in 2007 showed around 3,500 acres of sweet corn is grown in Iowa. He says that took a hit when the last sweet corn cannery in Ackley closed and sweet corn production dropped by about 4,000 acres. Iowa grows 12 to 14-million acres of field corn annually. Blevins says most of the Iowa sweet corn is comsumed right here.

Bevins says most of it is sold at farmers markets, at farm stands or in grocery stores in the state. He says the closing of the last cannery plant in Ackley means not much is sold for canning to be shipped out of state. Sweet corn has been averaging around five dollars a dozen for the early Fourth of July corn the last several years.

The price does drop as the season moves on and supplies become more plentiful.The combination of rain over the last few weeks and the recent heat could bring a big mosquito population to Iowa. The warmer temperatures will cause huge batches of mosquito eggs to hatch soon, but it’s not clear if the bugs will be biting all summer long.