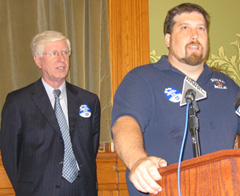 Miller, a longtime opponent of tobacco products, believes Iowa may be among the top five states for the percentage of residents that don’t smoke. He says less than one-percent of Iowa’s 82,000 businesses subject to the Smokefree Air Act have been found in violation of the law.

“There was a series of bars that were resistant, that didn’t comply, but by taking the approach that they would lose their (liquor) license at least for a period of time, I think has worked,” Miller said.

“I think the message has gotten through.” State officials say just over one-thousand businesses have been sent Notices of Potential Violation of the law since it took effect last year. The owners of at least two bars are hoping to challenge the law in court.

“Some say that the Smokefree Air Act has hurt their business, but we have not found that to be true over the last year,” Bruning said. “Much larger issues over the last year have affected businesses. We had record floods, record rain and snow and don’t forget about the downturn in the economy.”

Bruning admits that bars in smaller Iowa towns have likely lost more revenue because of the smoke ban than those establishments in larger cities. But, Bruning says some of the business he lost was replaced. “Something that came out of (the smoking ban) that we weren’t really expecting…we’ve all seen an increase in the people coming to our bars that previously stayed away because of the smoke,” Bruning said.

“We have seen more families at our businesses and have purchased high chairs and child seats for all our businesses. Those are things that we hadn’t had in the past and were surprised to find that we needed to.” In addition to the smoking ban, the Iowa Legislature increased the state’s tax on cigarettes by one dollars a pack in 2007.